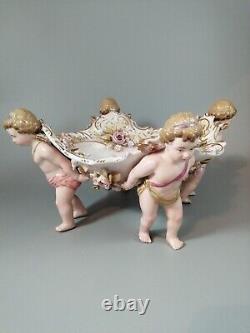 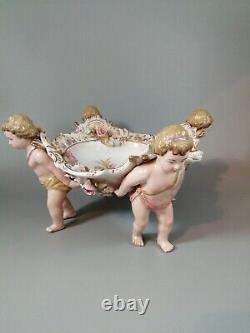 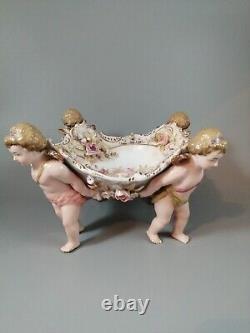 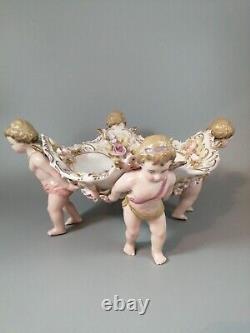 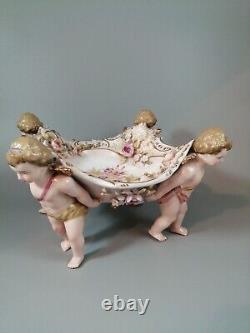 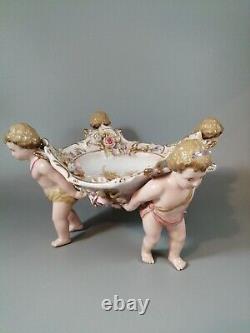 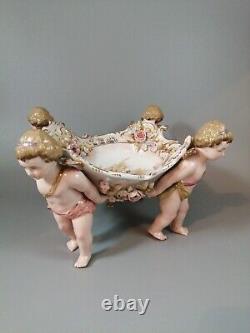 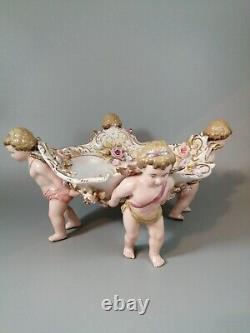 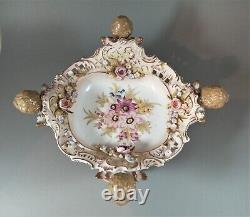 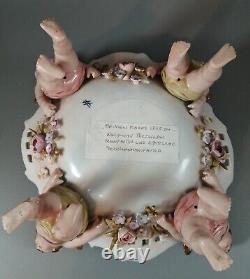 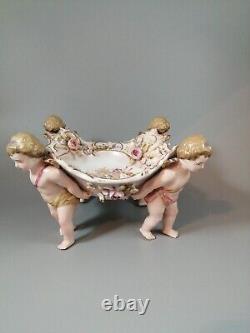 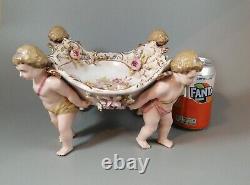 An antique German figural porcelain candy vase by C. Schierholtz & Sohn, featuring four winged cherubim supporting a hand painted, centre-pierced crown form bowl. The interior is painted in flowers and all-over floral and gilt decoration, maker's mark stamped on base. This mark was used from 1865 to 1907. Given the form, colours and overall design, this cup is dated to an earlier period, in my opinion 1870. The manufacture was founded in 1816 by Heuäcker Brothers. After one of brothers died, Christian Gottfried Schierholz became a partner. This Thuringian manufactory gained fame thanks to its lithophanes. These masterpieces produced since 1849 by Gottfried Henklein are made of unglazed porcelain with filigree, light-permeable engravings. The manufactory has in its resources more than 2,000 models. Their artists are still working on new motifs. In 1851 after Christian's death, the factory management was taken over by his sons, Julius and Hugo.

The second one, Hugo, died in 1860. His brother along with his widow Julie run the company. In 1877 took over the next generation, Max and Arthur (sons of Julius and Hugo). After Max left, Arthur gained sole ownership. The factory became a public limited company Von Schierholz Porzellan Manufaktur Plaue G.

Massive and robust, this piece was built to last for centuries, a real work of German master-craft. It's difficult to imagine how a 150-year-old porcelain vase could be so preserved.

Not a single iota of damage to the cherubs, and I also could not find any damage to the flowers, which is very rare. Usually thin porcelain leaves, flowers or petals break over time. But here, we can see that everything is in place. The paint is in excellent condition, though there is minimal, barely noticeable wear to the gilding.

At the bottom there is an old label, an expert's assessment which is obviously erroneous, but I left it. Please carefully regard all photos.

The seller is "popugai" and is located in this country: GB. This item can be shipped to North, South, or Latin America, all countries in Europe, all countries in continental Asia, Australia, New Zealand, Egypt, Reunion, South Africa.