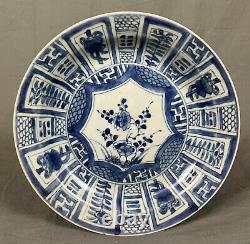 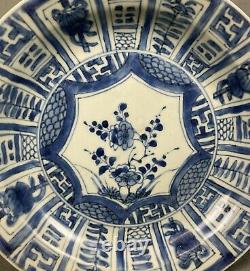 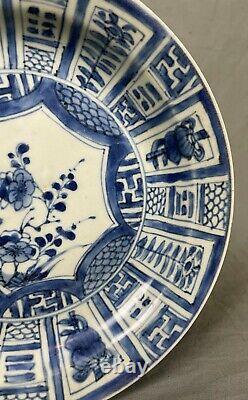 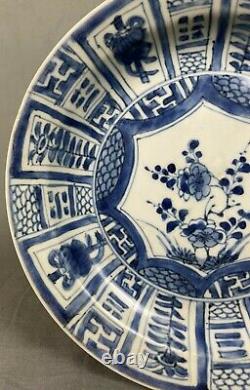 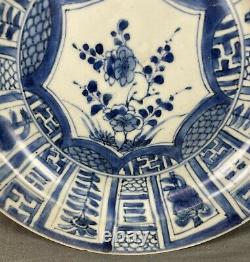 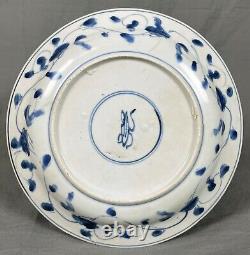 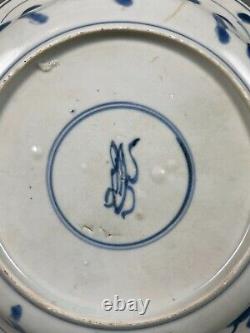 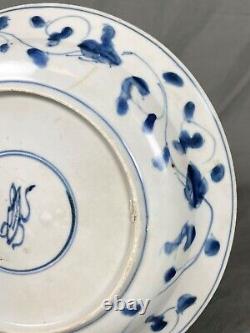 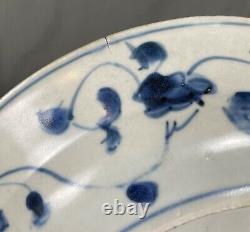 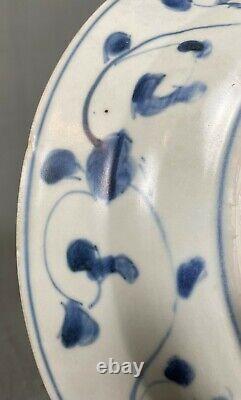 The centre depicts flowers and blossom issuing from rockwork. This detailing is surrounded by an eight pointed border containing fish scale and swastikas. Historically, swastikas had different meanings depending on which country they are portrayed. They are considered to be a sacred and auspicious symbol dating back at least 11,000 years.

Size: 21.4cm in diameter. If you have any questions please do not hesitate to contact.

He blue chrysanthemum shipwreck was lost in the South China sea, late 17. Century AD, and recovered in 2014. The wares were predominantly Jingdezhen blue and white porcelain, although multi-coloured ceramics and utilitarian wares were also uncovered within the cargo. Some items were display wares whilst others were intended for use.

The Cargo included a large GU shaped vase which truly was a. The porcelain recovered from the wreck was exclusively Chinese ceramics, all assessed by experts to be excellent examples of early Chinese Kangxi in origin indicating they were manufactured in the famous porcelain centre of Jingdezhen in the Jiangsu Province. Jingdezhen kilns made porcelain over two millennia, since the Han Dynasty.

Jingdezhen kilns supplied the most artistically advanced ceramics to the world for centuries. Blue and white porcelain was the most famous product of Jingdezhen, and reached the height of its technical excellence in the early Ching Dynasty. The shipwreck pieces recovered are typical of the highest quality blue and white of the Kangxi period, characterised by charming and sophisticated designs. They demonstrate a great expertise in the production of a brilliant under glaze in sapphire blue, applied in five or six tones to produce a vibrant, dimensionally nuanced effect, together with a fine thin attractive white (or slightly bluish) silky glaze applied to a stark white and finely formed body. The cobalt blue colouring is distinctive on the early Kangxi porcelain and is referred to as'gem blue' or'Kingfisher Blue', it is much purer and brighter than that of Ming Dynasty wares.

Large pieces were uncommon during this period, their manufacture being made difficult by quality control requirements. Designs were sometimes based on Buddhist and Daoist themes, or sourced from illustrations of Ming stories such as'The Three Kingdoms' or'The Romance of the west Chamber' together with the dramas'Xixiang Ji' and'Wui Hu Zhuan'. Chinese Kangxi blue and white porcelain was increasingly varied and innovative in its designs. The influence of Dutch and other European shapes and designs were in evidence prior to and during the Kangxi period. The very high standards achieved early in Kangxi's reign, evident in the samples recovered from the shipwreck, mark the high point of quality for Chinese blue and white ceramics.

Quality declined in later stages of the Kangxi Emperors reign, as the huge demand for Chinese blue and white porcelain developed in both overseas and home markets, giving rise to a profusion of unregulated kilns. Quality was diluted by increased production volumes, and as the Ching Dynasty progressed, competition from mass produced wares and the instability of the political environment debased the traditional fine porcelain industry. This item is in the category "Antiques\Asian/Oriental Antiques\Chinese\Porcelain". The seller is "joblackdog" and is located in this country: GB. This item can be shipped worldwide.