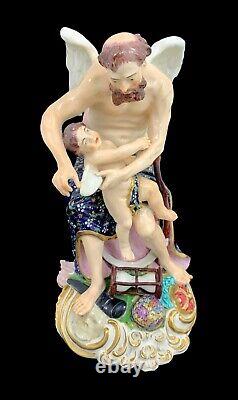 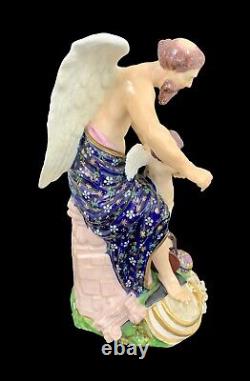 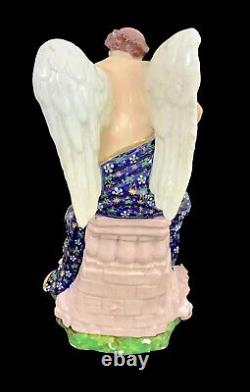 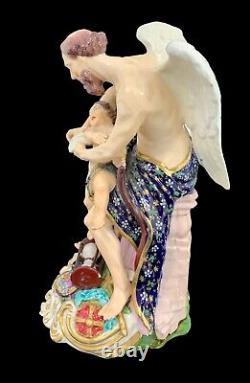 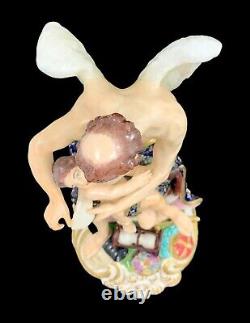 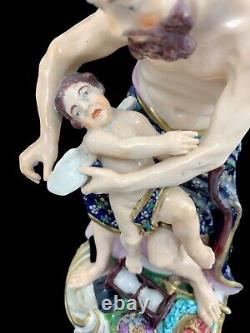 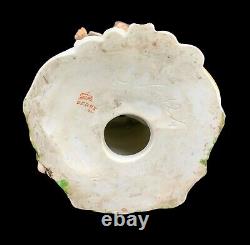 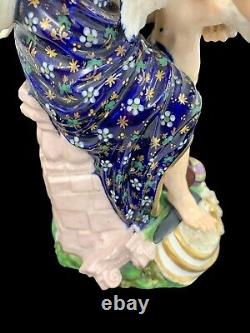 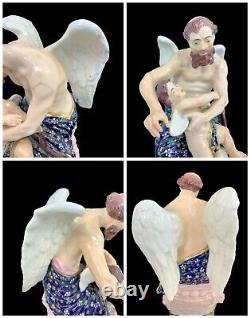 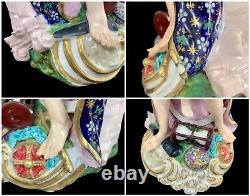 Group in soft-paste porcelain, painted with enamels and gilded, of Time clipping the wings of Love, and Time is seated on a pedestal of masonry with flowered drapery thrown round his waist, and holds Cupid on his knee, and at his feet on the scrolled base, are a scythe, hour-class, crown, sceptre, terrestrial globe, skull, and Cupid's quiver. Circa 1765 CE - 1780 CE. The print of this subject by Charles Phillips, is dated 1772, and is therefore too late to have been used for the earliest versions of the model.

A coloured etching of this subject made c. The theme, however, may have been inspired by a more recent work, Otto van Veen's Amorum Emblemata (1608), which included the verse:'Loues harrte is euer young T'is onlie tyme that can the winges of Cupid clip, And make him fly more low than he was wont to doo, But Tyme clips not away his good will thereunto, The aged carter loves to heare the lashing whip. Thorpe, Derby Porcelain, London, 1971, pp.

124 where the model is described as adapted from an engraving by Charles Philips after a Van Dyke painting of the same subject. One of the most famous works of early period Derby, it is present in many museums around the world and also at the most famous auctions. National Gallery of Victoria, Melbourne. This figurine appears to be part of a unique collection of porcelain Derby figurines, which has been meticulously gathered over many years.

The Derby Porcelain factory has its roots in the late 1740s, when Andrew Planché, a Walloon Huguenot refugee, started making simple porcelain toys shaped like animals in his back yard. The combination of various traditions, porcelain making skills and sophisticated clients enabled Duesbury to create one of the best porcelain factories of the 18th and 19th Centuries, which after many ups and downs is still operative today. The reputation of the factory's output was at its 18th century peak and in self-published advertising material, the "Derby Porcelain Manufactory" was proclaiming itself to be "the second Dresden". Duesbury maintained what would now be termed "retail space" independent of the Chelsea works, at a former pub - The Castle Tavern - in Bedford Street, Covent Garden.

This was both a warehousing facility and an exhibition area, and was the shopfront for what had by now become "a very thriving and lucrative trade". Derby porcelain was hand painted, some with with imari patterns, in London at the Chelsea pemises and the output from this dual operation is Chelsea Derby. It's worth noting that Duesbury also used representations of the marks used on Sevres, Dresden and Berlin-made porcelain, as he considered his own wares to be superior to every other source other than those three. Antique British porcelain is never perfect. Kilns were fired on coal in the 1800s, and this meant that china from that period can have some firing specks from flying particles. British makers were also known for their experimentation, and sometimes this resulted in technically imperfect results. Due to the shrinkage in the kiln, items can have small firing lines or develop crazing over time, which should not be seen as damage but as an imperfection of the maker's recipes, probably unknown at the time of making. Items have often been used for many years and can have normal signs of wear, and gilt can have signs of slight disintegration even if never handled. Some minor scratches, nicks, stains and gilt disintegration can be normal for vintage items and need to be taken into account. Cupid - professional restoration to right wing. Shears missing; underglaze hairline crack to left shoulder; some wear to gilt; two chips to the very bottom edge of the blue tunic; professional restoration to both wings. Excellent antique condition, Crazing to enamel commensurate with age.

Please carefully regard all photos. Item will be sent fully tracked and insured.